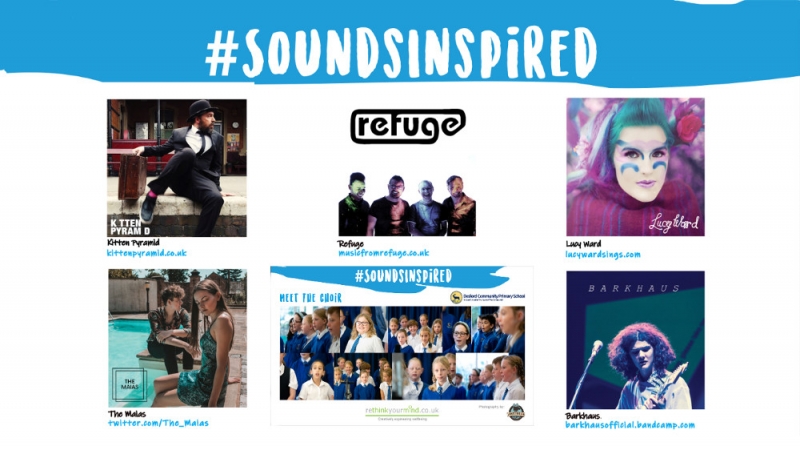 Many music artists came together to help inspire entries for the mental health and wellbeing project #SoundsInspired. Lucy Ward, Refuge, Kitten Pyramid, The Maias, Barkhaus, Ellis and The Year 6 Desford Community Primary School Choir all adding vocals to the track to help support the not for profit project. Hundreds of entries came from all over the country as people submitted to uplift and inspire others and become the cover to the song.  The track is now released and features on #TheAudioYellowBook a digital wellbeing resource, providing simple tools, practices, spoken word and music with the aim to help empower people in maintaining their health.

Thanks to all the artists involved!

Refuge The #SoundsInspired single has been developed from a track from their latest album ‘Perception’. ‘refuge’ have been creating and donating music to the creative, wellbeing project: ‘rethink your mind’ for the past few years, writing songs, developing the public’s poems into lyrics and producing music for the mindful meditations by Claire Evans that feature on the project’s resources. The focus of the ‘rethink your mind’ project has always been about what helps people feel better and ‘refuge’ band members agree that it’s good to value our wellbeing and focus on what inspires us, especially in these times. They are delighted that artists they respect so much, have come on board to support this work and they hope that you’ll enjoy being part of this project which aims to lift and inspire others.
musicfromrefuge.co.uk

Lucy Ward Named ‘Brit-Folks most vibrant and forthright new young talent’ by MOJO, ‘Impressive and original’ by The Guardian and ‘Inspiring’ by Billy Bragg, BBC Radio 2 Folk Award Winner Lucy Ward is a critically acclaimed singer songwriter and folk musician. Her songs are a sweet mixture of evocative imagery and quiet, involving beauty; passion, protest and tradition all rolled into one. Her voice is breath-taking, this captivating and powerful performer and has a unique ability to inhabit the very heart of every song.
lucywardsings.com Kitten Pyramid In 2013, Kitten Pyramid’s debut ‘Uh-Oh!’ was recorded at the legendary Rockfield Studios. The album was supported with a tour of psychiatric hospitals as documented in The Guardian who followed them for two days, and was a show of support to those living with mental illness. ‘Uh-Oh!’ found fans across the UK’s media landscape with Mojo rating it 4/5, Classic Rock 8/10, The Independent claimed “…this is your new favourite band” while The Guardian named them Band Of The Day while Q and Channel 4’s Sunday Brunch made them Track of the Day and Week respectively. In 2021 ‘KOOZY!!’ was released receiving equally rave reviews with Classic Rock calling it a ‘Beautiful Album’ 8/10. Daryl Easlea of Record Collector wrote ‘There are many groups who vie for the much-vaunted tag of “the best band you’ve never heard of” – but few actually are truly worthy of it.’ The final album ‘IDIOT!!!’ will be released in 2022.
kittenpyramid.co.uk The Maias are a friendly neighbourhood indie pop duo from Nottinghamshire, comprising of Matt Bulmer and Eva Lightfoot. The pair have been writing and recording songs in their spare room all year. Their two singles ‘Constantine’ and ‘Daydreams’ draw inspiration from Darwin Deez and Fickle Friends and have both been featured on BBC Introducing. They are currently working on their upcoming third song which is due for release in early 2021.
twitter.com/The_Maias Barkhaus My name is Barkhaus. I’m an artist from Lincolnshire, I draw my inspirations from my surroundings and experiences. I strive to create music that resonates, changes and grows. My most recent album, Intime, explores the season of winter, its place in the cycle of months and its effects on myself and my environment. I am honoured to be able to use my skill to benefit the amazing charity, RethinkYourMind.
barkhausofficial.bandcamp.com Ellis As a seasoned veteran of the music scene, Adam has played all over the UK and Europe is various guises. He has fronted a chart topping band, works constantly in his studio, Deadline Studios, and plays the part of Graham Nash in the touring tribute to CSN, Marrakesh Express and Art Garfunkel in the touring tribute band ‘The Sounds of Simon’. Adam Produced the #SoundsInspired single at Deadline Studios and also added all of the harmony/backing vocals to the track allowing us the opportunity to add a choir to the recording. He has been a valuable asset to the project since its inception producing, recording, mixing and mastering the songs, mindful meditations and spoken word that feature on #TheAudioYellowBook.
soundsofsimon.co.uk
deadlinestudios.co.uk The Desford Community Primary School Year 6 Choir An amazing time working with the talented and enthusiastic pupils at Desford Community Primary School. The sounds inspired music single is all about encouraging that playful creativity within us and it was a delight to record with the students – well done to all involved and thanks to the school for their collaborative spirit with this project. A special thanks to Adam Ellis and Doug Jenkinson for recording and filming the time at the school.

“We were really excited to be asked to take part in the Sounds Inspired project. It came at a great time for us, when we finally had all our pupils back in school and when the well-being of everyone was very much at the forefront of our agenda. Once again the project inspired fantastic responses from our children and we feel very proud of the work they produced and the ideas they shared around well-being. Thank you for the fantastic opportunity.” 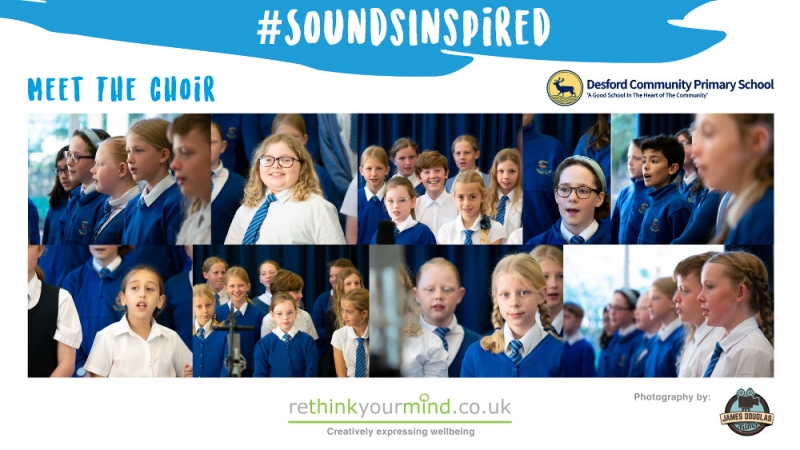