Our sincere thanks to all the amazing artists involved who gifted us their time and talent to make this special event possible. We are delighted Ant Miles of Fancourt Music stage managed the online event!

We send a huge, huge thank you to everyone as we raised £750 on the night!
DONATIONS are still welcome, (for those that can) raising funds to provide #MentalHealth & #Wellbeing resources!

Mark Morriss as lead singer with The Bluetones, Mark has enjoyed a 25 year recording career that produced 6 studio albums, 3 of which achieved Top 10 sales in the UK, including the #1 album ‘Expecting to Fly’, 13 Top 40 singles, and a Brit Awards nomination in 1996. Mark has recorded 4 solo albums, including Look Up released in September 2019, and music for various side projects, including the title music for all of the audio book versions of David Walliams’ children’s stories, and as a member of Matt Berry’s touring band ‘The Maypoles’. Mark has also been a judge on the Album of the Year panel for the Ivor Novello Awards.
markmorrissmusic.co.uk

Lucy Ward Named ‘Brit-Folks most vibrant and forthright new young talent’ by MOJO, ‘Impressive and original’ by The Guardian and ‘Inspiring’ by Billy Bragg, BBC Radio 2 Folk Award Winner Lucy Ward is a critically acclaimed singer songwriter and folk musician. Her songs are a sweet mixture of evocative imagery and quiet, involving beauty; passion, protest and tradition all rolled into one. Her voice is breath-taking, this captivating and powerful performer and has a unique ability to inhabit the very heart of every song.
lucywardsings.com

Refuge The #SoundsInspired single created for the latest project from rethinkyourmind has been developed from a track from their latest album ‘Perception’, mentored by Mark Morriss of The Bluetones. ‘refuge’ have been creating and donating music to the creative, wellbeing project: ‘rethink your mind’ for the past few years, writing songs, developing the public’s poems into lyrics and producing music for the mindful meditations by Claire Evans that feature on the project’s resources. The focus of the ‘rethink your mind’ project has always been about what helps people feel better and ‘refuge’ band members agree that it’s good to value our wellbeing and focus on what inspires us, especially in these times. They are delighted that artists they respect so much, have come on board to support this work and they hope that you’ll enjoy being part of this project which aims to lift and inspire others.
musicfromrefuge.co.uk

Kitten Pyramid began as a collective in 2010 and ranged from two to 20 members. In 2013 they released their debut album ‘Uh-Oh!’ and were picked up by 6Music’s Chris Hawkins and Tom Robinson (who later supported his UK tour). Kitten Pyramid launched ‘Uh-Oh!’ with a tour of psychiatric hospitals, including Bedlam and were followed by The Guardian for two days. Kitten Pyramid have featured in Q, MOJO, Classic Rock, Prog and were the Guardian’s Band of the week and Sunday Brunch’s Single Of The Week on Channel 4 for their ‘weird and wonderful’ pop. Second album KOOZY !! is out NOW and was recorded in Rockfield Studios with The Leisure Society and produced by Oasis/Beta Band/ Furries legend Nick Brine.
kittenpyramid.co.uk

Ellis As a seasoned veteran of the music scene, Adam has played all over the UK and Europe is various guises. He has fronted a chart topping band, works constantly in his studio, Deadline Studios, and plays the part of Graham Nash in the touring tribute to CSN, Marrakesh Express and Art Garfunkel in the touring tribute band ‘The Sounds of Simon’. Adam Produced the #SoundsInspired single at Deadline Studios and also added all of the harmony/backing vocals to the track allowing us the opportunity to add a choir to the recording. He has been a valuable asset to the project since its inception producing, recording, mixing and mastering the songs, mindful meditations and spoken word that feature on #TheAudioYellowBook.
deadlinestudios.co.uk
soundsofsimon.co.uk
marrakeshsite.wordpress.com

Project Lead Pete Hirst and company director Claire Evans, also of The Centre of Wellbeing, hosted the event updating on all the work the project has been doing in these times. 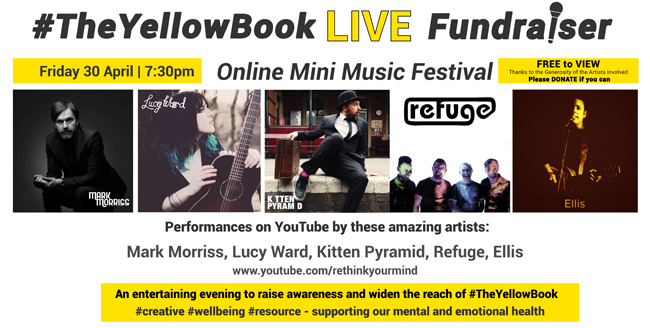